Maintenance of surveillance cameras might not seem like the sexiest of topics, but without doubt it’s one of the most important. Without regular and diligent maintenance – both ‘digital’ and physical – the quality of video images will start to erode, and the risks of failure grow.

The need for the ‘digital’ maintenance of surveillance cameras – specifically through the timely application of firmware and software upgrades – is well understood as being necessary to sustain and monitor performance, and for effective cybersecurity. However, the physical maintenance of surveillance cameras, which is no less important for peak performance, can be less rigorous.

In our experience it’s rare for the physical maintenance of surveillance cameras to be specified, let alone clearly documented, and therefore it becomes overlooked. This can be costly.

This might be understandable. Even if designed to withstand extreme weather conditions, surveillance cameras are still sophisticated pieces of technology. Anyone lacking the knowledge, skills, and equipment to maintain then will inevitable be wary of touching them in case they damage or even just move the camera.

Manufacturers need to play a role. We should take more responsibility for providing instructions and guidance about physical maintenance, including specification for cleaning agents and materials. 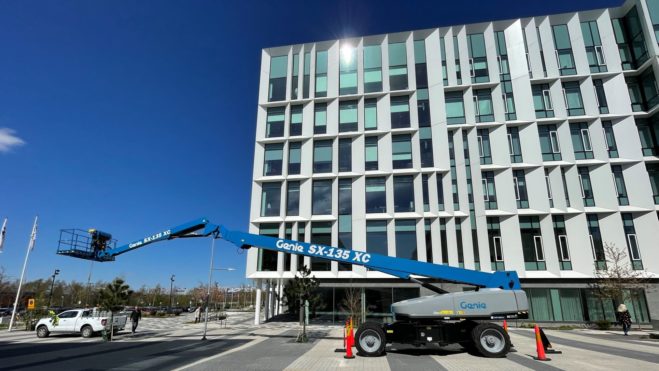 These window cleaners could have cleaned the cameras as well, if somebody would have asked them to…

It’s essential that the approach to physical maintenance of cameras is improved if they are to perform to their full potential, 24 hours a day, seven days a week

It’s obvious to say that a principal requirement of surveillance cameras is a clear view of the scene. Anything that obstructs that view affects performance, and this is becoming even more important in a world where edge analytics is increasingly being used.

To an extent, human operators can cope with views of scenes that are ‘good enough’. That said, when it comes to post-incident investigations, less than perfect images could be costly. An operator might be more than able to clearly see vehicles in a scene, but if in an investigation of an incident a number plate is partially obscured the effectiveness of the surveillance footage would be undermined.

Increasingly, edge analytics in cameras means that the images are being ‘viewed’ in an entirely different way. Processing units look at data, whereas humans looking at images – and the impact of unclear images can be huge. There’s no way for a processor to ‘see around’ a partially obscured view. If the data says it isn’t a vehicle, it isn’t a vehicle.

For human operators and processors, the issues can be exacerbated during night-time and low light. In these situations, cameras us infra-red (IR) to illuminate a scene. Dirt on the front window or dome cover of a camera which is barely visible during daytime can drastically impact the image during night-time due to the reflections from IR light.

Similarly, spiderwebs are hardly visible during bright daylight but again, at night they are brightly illuminated by the camera’s built in IR illumination. In addition, a spiderweb gently swaying in the breeze can cause a vastly increasing bitrate and the associate bandwidth and storage needed. Modern AI analytics will have a hard time doing their job, since the objects of interest will be obstructed by the strings of the web. A clear image of a spider in its web might be great for a nature TV show, but is less useful to surveillance.

A lack of regular physical maintenance can also have an impact beyond image quality. A build up of dirt and dust in a camera, or even insects nesting in camera ventilation channels, can also lead to issues with overheating and potentially component failure if left unaddressed.

There are a number of ways that physical maintenance of cameras can be made a priority, rather than an afterthought or even left ignored, and everyone in the value chain has a role to play:

A more proactive approach to physical maintenance of cameras not only keeps them fit for the purpose for which they were installed – it can also lead to operational efficiencies in itself. Cameras are maintained when they need to be, rather than as a matter of course, which in some case might actually mean less time spent on maintenance than previously.

Surveillance cameras represent a significant investment for any organization. If the maximum return on that investment is going to be realized over the longest product lifetime possible, effective physical maintenance is essential.

Take good care of your surveillance cameras. After all, you might need them.

Find the best Axis network camera to suit your needs.

View all posts by AdvaTech Author →